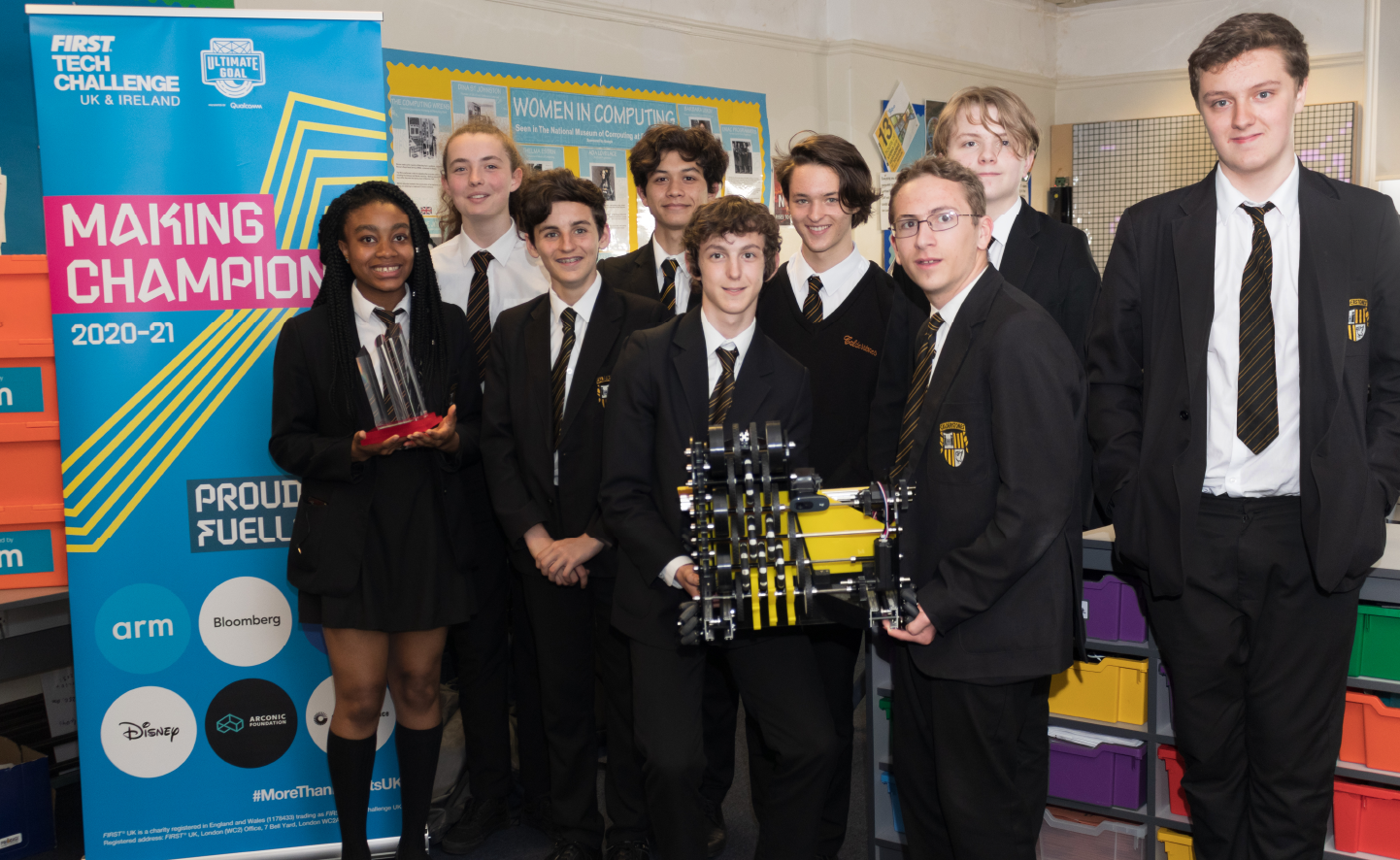 We’re a 10-person-strong team from Liverpool, UK, and we have a passion for robotics. We’ve put in hundreds of hours of work on our robot this year – every team member contributed in some way, shape or form to build our robot.

How we worked together

At the start of the season, we came up with ideas by gaining inspiration from some experienced American FIRST Tech Challenge teams. Every week, our social media coordinator went “scouting” and put together a presentation showcasing some of the robots he found that week, and we built on these ideas for our launcher, intake and drive mechanism. Then we slowly put together a stage-by-stage plan, which our team lead then helped translate into CAD using Fusion 360, and into real components using a Prusa 3D Printer. Along the way, every team member contributed each session with every part of the robot, from screwing some nuts in, to managing the cabling around the robot – nobody was left out.

One significant challenge we had this season was when we were prototyping our lift mechanism. We originally planned to have four grip wheels at the bottom, with the rest of our lift intake having shafts of omniwheels. The top few shafts would be powered by one motor and the bottom wheel shaft would be powered by another motor to allow us to control how many rings we should pick up.
One problem that stood out was the fact that our lift mechanism did not have enough clearance for our rings to be lifted up into the mechanism. This was because when we were designing the lift in CAD, we had misremembered that the Ultimate Goal rings were 0.5 inches, whereas they were actually 0.75 inches. We used acrylic side panels with specific axle holes, meaning that to solve this problem, we had to re-laser-cut new panels to allow more clearance for our rings.

Even then, there were still some other problems:

To solve both of these problems, we fitted 4:1 ratio gearing on the lift motors – trading off torque for speed – allowing our motors to brush up the rings without jamming. Alongside this, we substituted the bottom few grip wheels for star-shaped-nubbed TPU wheels – this was because TPU is soft, meaning that it would be able to brush our rings into the lift mechanism with just the right amount of tension, in conjunction with our ramp at the bottom.

This season, we learnt a lot about STEM, programming, and outreach. Even with Covid dragging back our progress, we pushed through and got a robot built in time to compete. Earlier this year, we held a talk with Kraken Pinion, an American team from Wisconsin, about autonomous techniques, where we learnt a lot about techniques like deadwheel odometry, V-SLAM localisation, and etc. Next season in fact, we plan to use an Intel RealSenseT265 camera to visually localise our robot on the field in conjunction with deadwheel odometry pods for extra resilience.

Winning the award felt awesome. It was great to have our efforts recognised in a year of what was otherwise chaos. We’d like to thank FIRST UK for giving us the opportunity to compete remotely this year, and we’d also like to thank the American FIRST Tech Challenge teams Primitive Data (FTC18219) and Acme Robotics (FTC8367). Primitive Data were kind enough to give us access to their OpenOdometry pod schematic which we adapted for parts available in the UK, and Acme Robotics have put together the fantastic RoadRunner library that we used for our autonomous. However, last but not least we’d like to especially thank our team lead for giving us lots of guidance on strategy, CAD, programming – essential skills that meant our team was able to cobble bits together this season.

What’s next for our team

Next year, with everything hopefully getting back to normal, we’ll be able to bring in members outside of our current year group and we will be able to more effectively coordinate and compartmentalise roles to other team members.